Bitcoin in 5 minutes – are you ready for the revolution?

If you follow financial or tech-media, you must have heard about cryptocurrencies such as Bitcoin or Ether (Ethereum). Perhaps you’ve heard that this is the future of payments? Or maybe you’ve read stories about investors who have either earned or lost large sums of money on of these currencies.

But what is a cryptocurrency, and what can you expect from this payment method in the future?

Most online payments nowadays are carried out using credit cards. When Sarah wants to buy a shirt via an online shop, she usually pays with Visa, Mastercard, etc. It can be done using plastic or over the phone. But Sarah and the shop need a middleman to manage the money transaction. This middleman is more often than not a bank that authenticates the identities of both parties and controls their accounts, money holdings, etc.

The system is smart, because it enables a relatively quick transaction of value, so Sarah doesn’t have to actually go to a store and put the money on the counter.

But is this way really smart enough?
In the internet age, a system of computers can exchange information in a split second, with next to no costs. So why does Sarah find herself in a situation, where she first has to be approved by her bank in order to open a Visa card? And why should she then deal with high fees and often relatively slow money transfers when she buys things online?

This is precisely what virtual currencies such as Bitcoin or Ethereum (Ether) try to solve.
Instead, if Sarah were to use a virtual currency transfer, she could simply skip the bank-middleman, and thereby save on bank-related costs and issues: fees, approval procedures, and time.

But if a bank is out of the picture, who stands for the veracity of values and transfers? The answer to that question gives insight into the genius solution of cryptocurrencies. In principle, authenticity is approved by everybody in a system of computers and algorithms, collectively known as “blockchain”-technology.

Let us say that Sarah wants to pay for her skirt via a transfer in bitcoins instead of using her credit card. Initially, it is obviously required that the online store accepts payment in bitcoins (more on this later). If this is the first time that Sarah uses virtual currency, she should first open a so-called “wallet”, wherein she can store her virtual money. The wallet can be placed on Sarah’s computer or with an online business that stores her wallet. And she can easily have more than one.

A wallet includes a set of encryption keys that make it possible to transfer and receive payments. One key is called “private”, and it enables you to send virtual cash, and the other is called “public”, which allows you to receive funds. The latter can be perceived as an email address or a phone number that connects the transfer with the associated wallet.

When Sarah is ready to send her bitcoins to the store, she clicks on her wallet and enters the “public key” of the store. If you’re familiar with money transfers using a phone, this process is similar. However, even when you transfer money with a phone app, there is still a middleman in the form of a bank holding control over transactions and fees.

When Sarah has finished entering the “public key” of the store, she clicks “send”, thereby adding to the ingenious blockchain that represents the heart of cryptocurrencies.

A network of thousands of computers is now ready to receive Sarah’s transaction and approve it in each version of the common “savings account”, which is a part of the overall blockchain. Sarah’s transfer is linked to a number of codes that are entirely unique, for example, a signature, a timestamp and more keys that connect to ALL earlier transactions.

It takes between 0 and 2 seconds for the whole network of computers to see Sarah’s transfer. Only when the majority of the network has registered Sarah’s transaction and found that it fits both mathematically and code-wise into the chain of previous transactions, will the payment be stamped as correct.

So it is not the bank that ultimately approves Sarah’s payment, but rather a whole network of computers, each getting Sarah’s payment to vote, and write the transaction into bitcoin’s historical “bankbook”. And so, Sarah’s modest transaction will play a role when all future bitcoin transactions are to be approved as either true or false.

The popularity of cryptocurrency transactions are steadily on the rise, so much that physical stores (or even gas stations) can now buy Bitcoin atm and set it up for customers to either buy or sell their Bitcoin on the go. So, if a store accepts bitcoin as payment, customers can just use their cash to buy some Bitcoin using the kiosk outside, and immediately make the payment. Now, this kind of transaction may not be ubiquitous yet, but who knows, it may soon well be!

Bitcoin, and all other related virtual currencies are very difficult to cheat on. If somebody wanted to use bitcoin blockchain for their own purpose, they would have to change the whole history of bitcoin in at least 51% of all the computers participating in the network. This is the only way for false transfers to be approved. One such change requires computer power 100 times more powerful than all Google computers put together. In reality, it is close to impossible. No country or company has so much data power.

In Bitcoin’s case, all computers in the authentication network are called “mining computers”, and owners if these computers are called “miners”. Anybody with access to the internet and a powerful computer can in principle become a “miner”. One’s computer becomes then a small part of the bitcoin network and helps with authentication of new bitcoin transfers from all over the world. As a reward for the help computer owners earn new bitcoins that naturally can be used to pay as well.

It may then sound tempting to become a “miner”. But working as a “miner” and profiting from it usually requires living in a country where electricity is cheap, as approval of bitcoin transactions demands enormous amounts of energy. 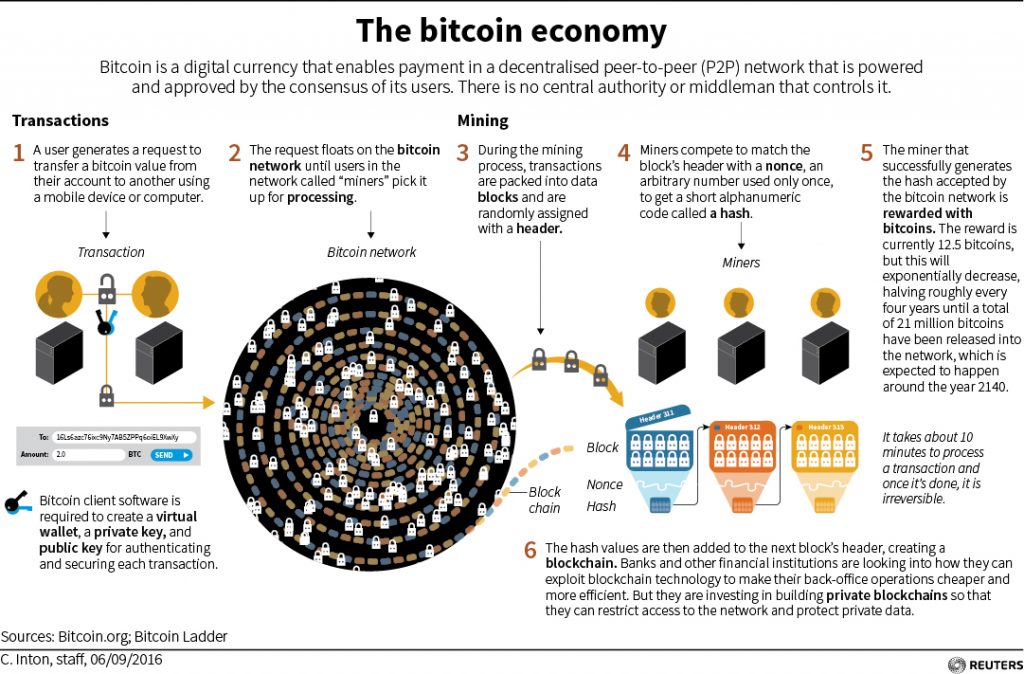 The Bitcoin system allows only for 21 million bitcoins to exist, and no more can be created. Thus, bitcoin differs from traditional currencies, where it is typically possible for the central banks to print more money. This means that bitcoin does not create the same inflation risk as a normal currency. Consequently, the value of Bitcoin will rise in line with the demand, which made it particularly interesting for investors.

Bitcoin and other cryptocurrencies such as Ethereum (Ether) have grabbed the headlines precisely as an investment opportunity. This is partly due to the fact the cryptocurrency exchanges have been hacked or have been subject to so-called flash crashes, where the value can plunge within seconds. But the problems have basically nothing to do with the virtual currencies. The usefulness of gold as a jewel does not fall if a local gold exchange is robbed. Thus, the technology behind the virtual currency lasts, even if the stock is crashing. If you want to learn more on how to invest in cryptocurrencies like Bitcoin or Ethereum, click here.

Blockchain as a revolution
The most interesting thing about virtual currencies is not, in fact, cryptocurrencies themselves. It is the underlying technology, namely blockchain, that can be used to much more than simply a currency. In the coming years, blockchain can potentially revolutionise our lives. Blockchain technology is basically a distributed database. Think of it as an enormous global spreadsheet, that runs on millions of private computers and can be updated. It is an open source technology that, in essence, everybody can add a piece of data (e.g. a transaction) to the underlying code according to the code’s rules. These data will then be written into and approved by all other network participants if the input code obeys/follows the rules. There is no central economic or political agency – the whole is approved by the community.

Thus, blockchain technology can be used for all structured information that needs to be easily validated and stored, and here sky’s the limit: Who has rented a car, how far did he drive, and how much energy was used? Who is married to whom, when did they divorce, and how many children do they have? Who now owns a particular piece of land, and who owned before? If land ownership is written into a big, common spreadsheet, nobody can come and suddenly lay claim to the land. In any case not in the ideal blockchain world, where all information can be entered, distributed, and approved by the system itself. Without any middlemen.

Consultancy firm McKinsey has interviewed the Canadian top advisor Don Tapscott about future possibilities of cryptocurrencies. Tapscott is a co-founder of Blockchain Research Institute. And he sees many revolutionary opportunities in blockchain technology.

“What if the new music industry was a distributed app on the blockchain, where I, as a songwriter, could post my song onto the blockchain with a smart contract specifying how it is to be used?”, explains Tapscott and gives an example:

“You listen to the music, it’s free. Do you want to put it in your movie? It’s going to cost you this much, and here’s how that works. You put it in the movie, the smart contract pays me. […] ”

Imagine a world where foreign aid didn’t get consumed in the bureaucracy but went directly to the beneficiary under a smart contract? Rather than a $60 billion car-service aggregation, why couldn’t we have a distributed app on the blockchain that manages all these vehicles and handles everything from reputation to payments? Ultimately, they’ll be autonomous vehicles moving around. Or blockchain Airbnb? This is all about the value going to the creators of value rather than to powerful forces that capture it.” he says.

Read more about investing in cryptocurrencies such as Bitcoin and Ethereum here. 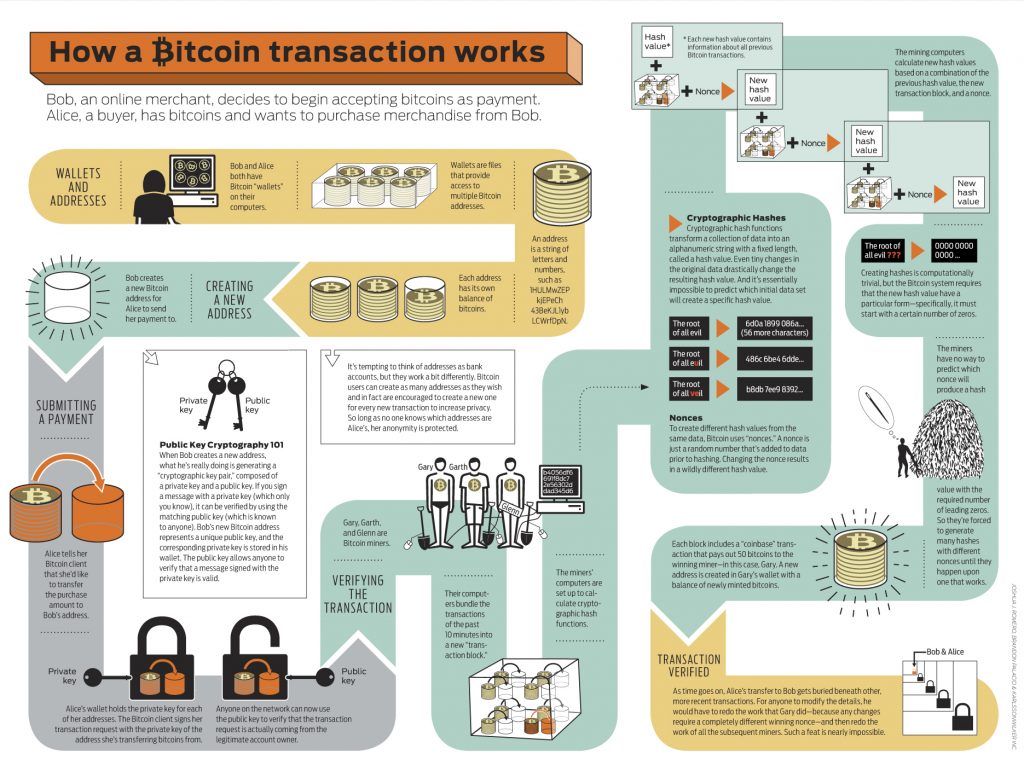